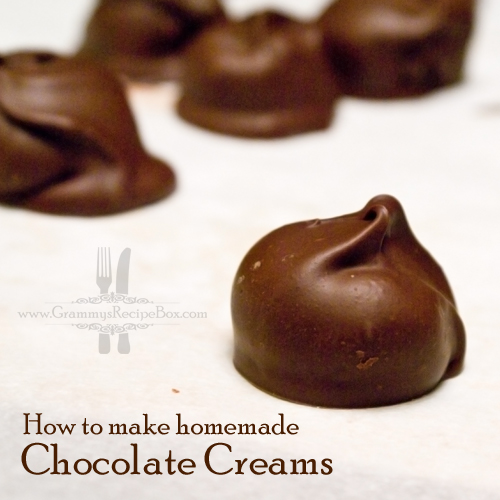 In Grammy's recipe box I found a handwritten recipe for "Chocolate Creams". 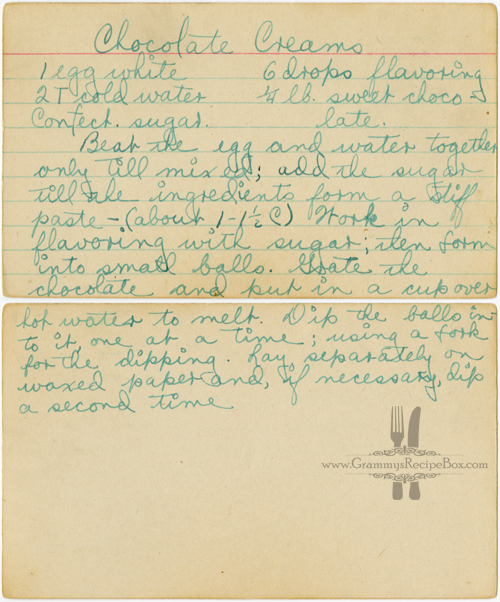 They seemed simple enough. But as I have discovered with many of the recipes in the box, the measurements on the ingredients are a bit vague--like exactly how much confectioners' sugar goes into the "cream" to make it a stiff paste. As Hubby pointed out, one was probably supposed to learn how to make it from watching someone else do it again and again. So I had to experiment a bit and tweak a little.

This is a direct transcription of the recipe (I did some tweaking that I'll note after):

Beat the egg and water together only til mixed; add the sugar til the ingredients form a stiff paste (about 1-1 1/2 cups). Work in flavoring with sugar; then form into small balls. Grate the chocolate and put in a cup over hot water to melt. Dip the balls into it one at a time; using a fork for the dipping. Lay separately on waxed paper and, if necessary, dip a second time.

Now for my tweaks and tips:

The results were decadent candy delights that feel "sinful" to even have in the kitchen. Hubby did try some of the "oops" candies and deemed them officially "sinful" in every way that a chocolate-covered almond and vanilla flavored sugar-paste ball can be. Of course I had to taste as I mixed to get the flavoring just right.  The tasting alone gave me a sugar buzz that I was still feeling as I typed up my notes over an hour later.