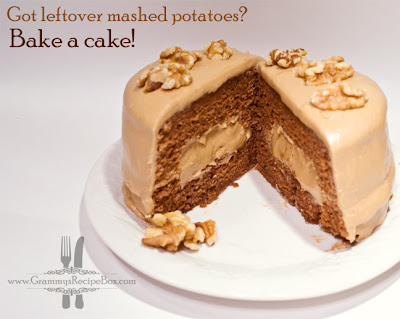 This recipe is written in fountain pen in my Grammy's handwriting and has attributed her aunt Esther's name in the top right corner. The title is written simply "Potato Cake". 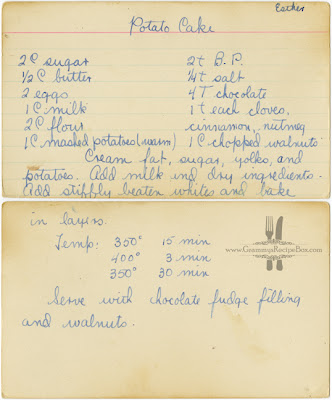 Well, let's see what the recipe says (my editorial comments are in red italics):

The first thing I did was discard the baking times because I decided it was easier to make this into cupcakes. Then I realized I was out of cupcake wrappers, so I went to the store to buy some. That's when I found the mini cake pans by Wilton that let you put filling inside the mini cakes. Bingo! That's what I wanted!

Everything went smoothly once I got back into the kitchen. I used unsweetened cocoa powder for the chocolate that the recipe called for. Once the batter was made up, I filled the cupcakes and the mini cake pans and baked according to the instructions for the cake pans. The cupcakes baked for about 15 minutes. The mini cakes baked for a little over 20 minutes.

Hubby wandered into the kitchen after the cupcakes had cooled for over a half an hour. He said, "Mmmmm! These smell good!" I told him to try one of the cupcakes without any icing on it. These are his exact unedited words:


"They sure knew what they were doing back then... Nice chocolate flavor and then you get the cloves... That's good! The cloves thing kinda stays with you... And now I want more... And they're fluffy and moist... It tastes very autumnal!"

The cake is a hit! It is a very dense cake although moist and fluffy (as Hubby said). I'm sure that it would work well in a bundt pan best. The cupcakes have the weight of light muffins.

Now what to do about an icing and filling...

I dug through the recipe box and found another recipe for "Caramel Icing & Frosting". 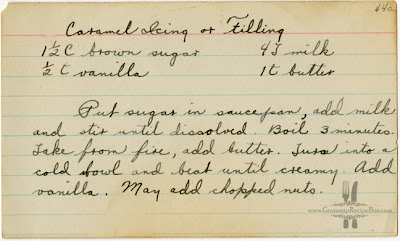 It sounded like a possible match. The recipe reads:
I followed the recipe as written. Everything was going along fine until I started beating the mixture to make it creamy. The mixture started to cool and become more of the consistency of real caramel candy!

Thinking quickly, I decided to add a little more milk and a little more butter. That solved the problem but it was more of the consistency of a glaze then the filling I needed. Realizing that the fat content of our 2 % milk is almost assuredly lower than the fat content of the milk Aunt Esther used, I added a bit of half-and-half, whipped it for a few minutes, and then I added a full cup of powdered sugar. That made the consistency more like a filling I could use with the mini cakes.

With the mini cakes cooled and the caramel icing/filling fixed, I filled the wells of the mini cakes, stacked the two layers, iced the whole little cake, and then put it in the refrigerator to chill. Then I garnished it with whole walnuts (Hubby can easily pick those off).

Both Hubby and I agree that the combination of the flavors, spice and caramel, are a perfect match. Yum! But I'm sure that there are a lot of other combinations you could think up for this classic vintage recipe. Let me know if you come up with one and make it. I'd love to hear what you paired Aunt Esther's "Potato Cake" with. I still can't believe it has leftover mashed potatoes in it.