When A Zucchini Gets Away From You 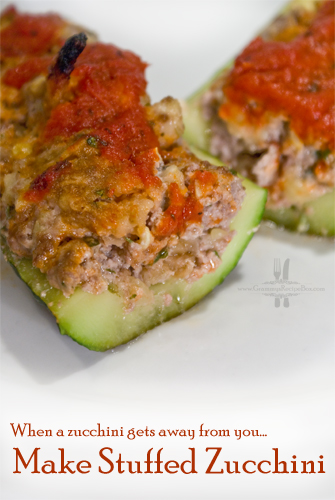 It's my fault. I was the one on "zucchini watch", and I failed in my duties. I failed to check the zucchini growing in the garden, and it got too big (as zucchini will do).

So what do you do if your zucchini gets away from you?

We decided to try the recipe, "Stuffed Zucchini", out of Grammy's recipe box. The recipe had been cut out of a magazine and looks like it's circa 1960s-1970s.

Hubby did the preparing on this one and found the recipe to be very easy to follow (which is a pleasant bonus when making a vintage recipe).

Here's what the recipe says (with our editorial comments in red italics):

Halve zucchini. Scoop out centers leaving 1/4-inch shell; place in shallow baking dish. Coarsely chop zucchini centers; mix with next 8 ingredients. Spoon into shells. Top with sauce. Bake in 350 degrees F in oven for 30 minutes. Serves 4. [If you use 2 pounds of zucchini] 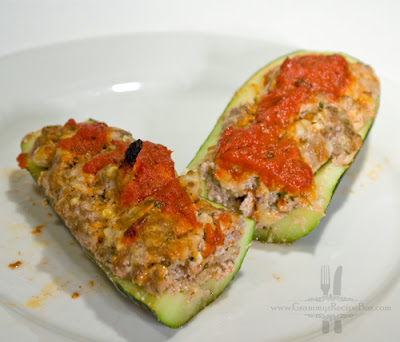 In the future, Hubby suggests that browning the ground beef would be better. Why? Because brown food tastes better!!!! And it would also reduce baking time.

Hubby said that the baking aroma brought back memories of his grandmother's kitchen because culinary creations of this kind were common during the 1960s. After baking was over, Hubby let it cool a bit since it came out of the oven the temperature of "hot magma".

Once it had cooled a bit, the tasting commenced. The flavor of the sauce against the filling mixture was good, but it definitely needed more salt. Once Hubby pumped up the salt, the flavor came alive. Hubby said it's not something that he would be addicted to, but it is most definitely a great quick meal option for using up zucchini from the garden--particularly zucchini that's gotten out-of-control huge! 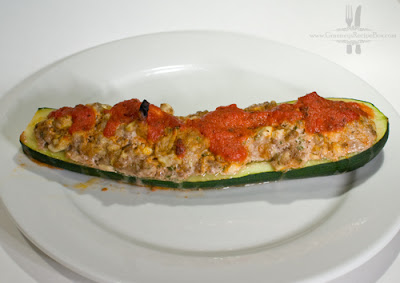