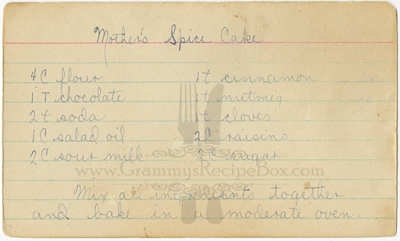 This recipe is written in Grammy's handwriting and attributed to her mother, El.

Ingredients:
Instructions:
This is of the few recipes in the recipe box that I recognize as possibly being a favorite that was passed down to my mom and made many times as I was growing up. It was a family favorite. My mom made this in a bundt pan and then iced it with a simple powdered sugar drippy icing. Sometimes she omitted the raisins. It is delicious either way.

Here the recipe my mom has always used: